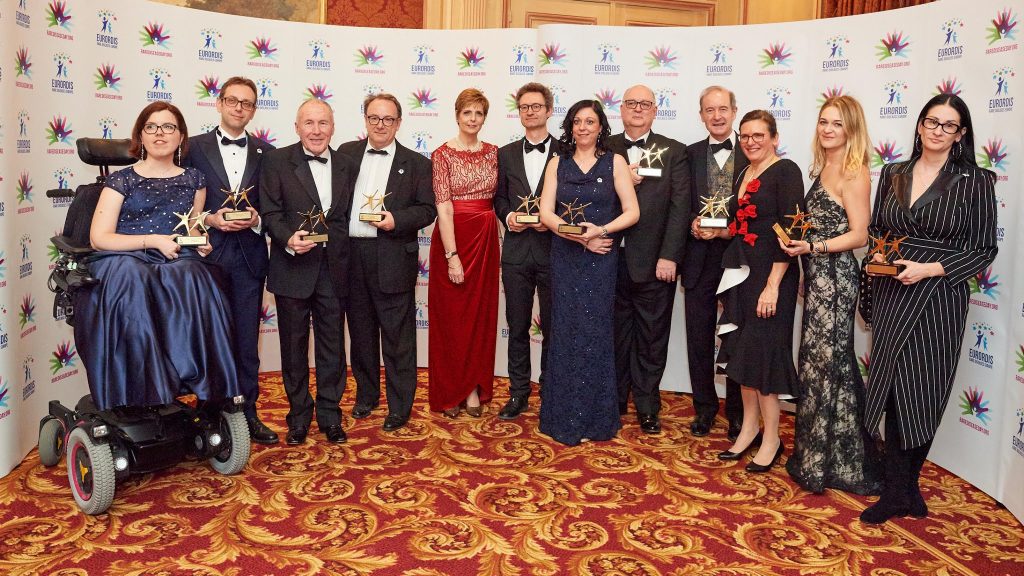 For her exceptional advocacy work, in particular through the AFM-Téléthon in France, to raise awareness of the needs of people living with a rare disease among a wider audience.

For his outstanding leadership and commitment to the rare disease community and the positive impact he has made on rare disease policy both in supporting national advocacy actions in Austria with Pro Rare Austria and on a European level as Co-Chair of the European Reference Networks Board of Member States.

For his outstanding work and support of the rare disease community through his dedication to patient advocacy and tackling rare diseases as a public health issue. As public health lead of the National Commissioning Group and author of the reform on highly specialised care in the UK, his role was of huge value in protecting the rare disease services at a time of important reform within the establishment of NHS England.

For his exceptional achievements in the field of amyotrophic lateral sclerosis (ALS) research as well as his outstanding support and care for ALS patients through his collaborative work with the patient organisation ALS Liga Belgium.

For his admirable commitment of over 20 years as a dedicated advocate of rare disease issues on behalf of the Behçet’s community and his longstanding supportive partnership with EURORDIS.

For his exceptional work as a patient advocate for all rare eye conditions (through LHON Society and  as a patient board member of ERN-EYE) and for all rare diseases in his work as one of EURORDIS’ longstanding volunteers.

For her inspiring documentary film ‘Et Les Mistrals Gagnants’ which raises awareness by following the lives of five children each living with a different rare disease.

For her specialised journal for rare diseases ‘Word for Life’, which has brought the needs of people living with a rare disease to the attention of a wider audience in Serbia and beyond.

For his exceptional work and vast achievements as co-founder of Fighting Blindness, founder of Debra Ireland and the Medical Research Charities Group, IPPOSI and Rare Disease Ireland. He has been a central figure in making a true and lasting difference for people living with a rare disease through his collegiate approach to advancing and funding medical research and providing platforms that represent the patient voice and improve patient access.

For ALS Liga Belgium’s great work in providing services and support that have significantly enhanced the quality of life of people living with amyotrophic lateral sclerosis (ALS) across Belgium and Europe.

For Chiesi’s strong commitment to rare diseases and its support to policy development, as well as its strong pipeline for bringing to market a wide number of treatments, including products for extremely rare diseases.

For the collaborative effort of all the companies involved in the HERCULES Project, bringing together patient organisations and industry to support access to new treatments for Duchenne Muscular Dystrophy (DMD).

For Air Liquide’s longstanding commitment to the development of life-changing respiratory devices and services, benefiting the lives of many people living with a rare disease at an international level.